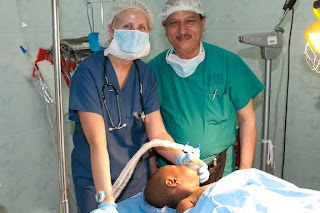 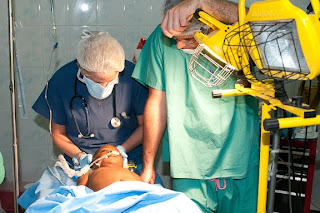 I made my way up to the volunteer breakroom for a snack and walked right into orientation for the team from Atlanta that just arrived today. I was editing pictures on my laptop, now covered in dust and scrapes while other fantastic volunteers and medical staff trickled in to take a load off.

While Shelby and I share stories and chit chat about the day, trauma nurse Lynn from the Ukiah group burst through the door. She's visually distraught and stumbling over her words. They had shown up with a two year old in the ER with a strangulated hernia, a condition that meant the bowel would die if not treated immediately. A life and death situation.

By now, the LEAP team had packed up and driven off to the house they are staying at several miles away. Unfortunately that means one of two anesthesiologists on premises is gone, leaving only Cassie. At this point, she has been utilized more than just about any other person on staff. She is exhausted and anxious at the prospect of committing to another procedure. However, she tirelessly puts her game face on and sets up the OR. The general surgeon from Fresno, Dr. Darain happened to be laying down for a snooze just as Lynn burst through the door. He has already performed at least three hernia cases in the short time I've been here. All with a remarkably steady hand and razor sharp concentration. His calm demeanor puts everyone at ease and he exudes an unspoken wisdom matriculated through years of experience. I expected nothing less from this procedure as well.

It was quite a story as to how the boy arrived at Adventiste. The Ukiah group who earlier this afternoon set out to Port Au Prince to find an orphanage stumbled across a tent city bordered by a concrete wall several miles from the hospital. Upon seeing the team of nurses, one of the guards at the gate frantically pleaded to one of the nurses to take his grandmother to the hospital who was bleeding from an unknown injury. Meanwhile, screams were heard within the walls as a baby was being hoisted through the crowd of people. They looked over and saw that the baby's testicle was protruding. They wasted no time in deciding that he needed to be treated immediately.

Everyone still on the hospital grounds who had any experience mobilized as best they could to get the child into surgery. And despite having only one anesthesiologist and a general surgeon, they pulled together to save his life.
Posted by Matt