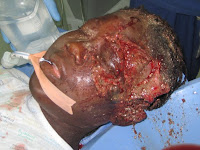 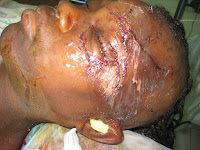 We were awoken early as a facial trauma patient came in to the ER. She was a young girl of twelve years and had been struck in the face by a large concrete boulder. The result of the family's house collapsing from damage sustained in the earthquake. Her five year old brother was also struck in the head. The Plastics team rushed down to the OR for emergency surgery to repair her face. Cassie administered anesthesia while Shelby provided a warm hand to comfort the obviously scared Haitian child. Although she was unable to see, she slowly found Shelby's arms to lean over and give a hug.

As she faded into sleep, Dr. Gabriel began to dibried the wounds. Shelby and Cassie stood by his side as he began three hours of meticulous grafting to save the young child's beautiful face. The result of the procedure was extraordinary. Every last scrape was repaired, preventing what would have been a permanent and horrific scar. All of which would not have happened without the team being here. They returned exhausted but relieved and got some much needed sleep for the remainder of the night.
Posted by Matt