A Better Path For Haiti's Recovery 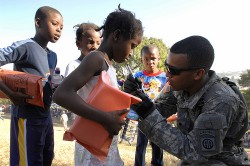 It appears that Haiti's "15 minutes of fame" are up. With few exceptions, the journalists who flooded the zone following the earthquake are nowhere to be seen. And the U.S. Senate Foreign Relations Committee's harsh criticism of the rebuilding effort six months after the earthquake is a sign that patience is wearing thin. Meanwhile, the lives of Haitians on the ground are still appalling — over a million in tent cities and squatter villages, rain flooding their streets, rape on the rise, too many basic services not restored.

In its recent report, the Senate Committee specifically pointed to the Haitian government's failure to address immediate needs, such as clearing rubble and moving hundreds of thousands of people to durable shelters in time for hurricane season. But the report also recognized the need for a more robust vision for how this island nation will thrive 20 years from now, and it has identified 10 keys for a successful long-term rebuilding effort. These included creating a plan of action, building Haitian government leadership, coordinating international aid and integrating the voices and interests of Haitian people - Haitian civil society - into the rebuilding process. It's this final recommendation that has not received nearly enough attention, from anybody.